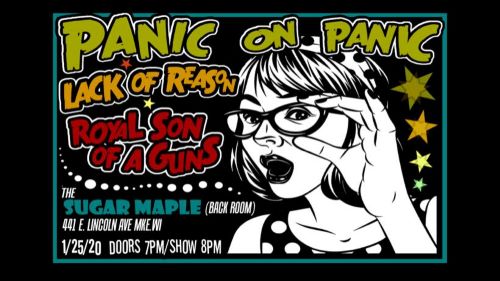 Panic on Panic performs for the first time this year with new drummer Tim Wick (Magnetic Minds/Test-Site). This show will coordinate with the release of their first single “Crashing Jets” as an introduction to their long-awaited EP that’ll be released in March 2020.

Panic on Panic is a visceral collective of songs in its simplest form, deriving from influences of new and old, ranging from Punk, Post-hardcore, indie rock, and Classic Rock music…

www.soundcloud.com/lack-of-reason
—————————————
Chicago Rockabilly powerhouse ROYAL SON OF A GUNS are not to be missed!

Like Bela Lugosi on a mechanical bull, Royal Son of a Guns belt out rip-snorting roadhouse acid folk-blues with heavy doses of surrealism. These barstool smashing miscreants take Americana on a psycho-cathartic hayride through the thorny nettles of the American roots music underbelly with primitive guitars, relentless rat-a-tat washboard and bedrock of bass guitar that will rattle your teeth. Dig.